This site is a patchwork of fiction, fictionalized experience, hard-polished throwaways, old things, new things, short things and long things that can be found by clicking on the fly-out menus above. Stories should take you somewhere. Let you listen in to conversations. Sit in places you wouldn't normally sit, introduce you to characters you don't know. You've opened the door, so pull up a story, let it loose on that big screen in your head. Enjoy. 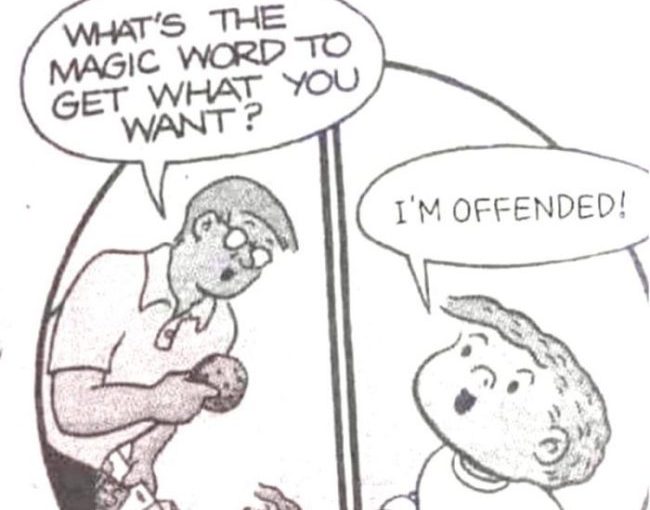 I’m sick of divisive language, and using it to leverage a point.

The whole thing is tantamount to giving Monet a 9-inch roller and gallon of flat grey latex. Or, hey, Beethoven! Here’s 37 mini-keys and a cheesy marimba sound. There will be no nuance, no finesse because they have been eliminated from the artistic palette.

This came up in blog where book banning was attributed to the broad swath of “conservatives” Possibly. More likely religious zealots and cultural extremists. I can’t seem to find any typical broad swath conservatives attempting to rewrite history or change 100 plus to five-thousand-year-old literature to make it more palatable to appease far less than a majority who are “offended”. Don’t read it, change the channel, put it down and write what you like to read. Erase history and we are doomed to repeat it.

It seems there is no viable discourse without attributable blame. A process that is perpetrated by pseudo intellectuals, bloggers, academia, talking heads, “influencers”, pop stars and politicians for the sole purpose of maintaining an electronic personal momentum. I recall a line from a Bonanza rerun – “If’n ye ain’t fer us, yer agin us!” What a mess. A lowest common denominator cheap shot mess.

I’m offended when, in a Google search, I get interrupted by an ad from either party asking for money to help beat down the opposition. Fuck you people, you know? WIFI and internet access ought to be free for everybody. Fix that, then ask me for money you don’t deserve to get nothing done.

I’m also offended by my last post. No, not the language. That’s a direct take. Or the portrayed racism. That’s real. Nope, what I’m offended about is that I don’t have a lot of followers because I don’t friend farm or fawn over mediocrity and what followers I do have, nary a single one commented. OMG, there’s characters talking racial smack all over the map. Okay I’ll like, maybe, but I won’t leave any tracks. God forbid anyone should think I endorse this type of thing. So here’s a secret. I wrote that on purpose. Not that I’m a fan fic person, but you could word it up a little and plug that scene into Get Shorty or Stay Cool or The Switch. Because when the racist, misogynistic animal thieving assholes bite it the crowd will cheer. Is 2005 so far away no one remembers what sort of books used to make movies? Or are we all so walled into our pillow forted weak sister half assed circle jerk of author liking author Indie cozies that we need broad swath right or wrong don’t offend anybody shit lit? Bob is a racist homophobe. I’m the author, believe me. The crowd screams, “Death to the racist homophobe!” Wow. Because the author said so? Great. Next step? Let’s paint every conservative as a book burning racist homophobe. I say behave like a racist homophobe, okay you are one. But just because somebody in a shitwhistle town in Georgia killed a black gay guy automatically makes every white male in Georgia a racist homophobe? That’s some scary Aristotelean logic right there. Scarier is that logic, in that vein is both pandered to and pervasive on both sides of the street.

Change the channel, turn it off, put it down. Because I’m offended by so much race and gender propaganda I could puke. For example, I’m cruising Google looking for a tutorial on a piece of musical software and half the screen is suddenly filled with Stop Asian Hate. WTF? Asian hate WAS the furthest thing from my mind. Until it was thrown in my face. My PCP is Dr. Nguyen. My pharmacist is Paul Nguyen. My urologist Dr. Benaim. My cardiologist Dr. Bavakati. These people are charged with keeping me alive and I am reminded to develop some hatred for them so I can then stop it and participate in the “conversation”? I’m offended.

This site uses Akismet to reduce spam. Learn how your comment data is processed.